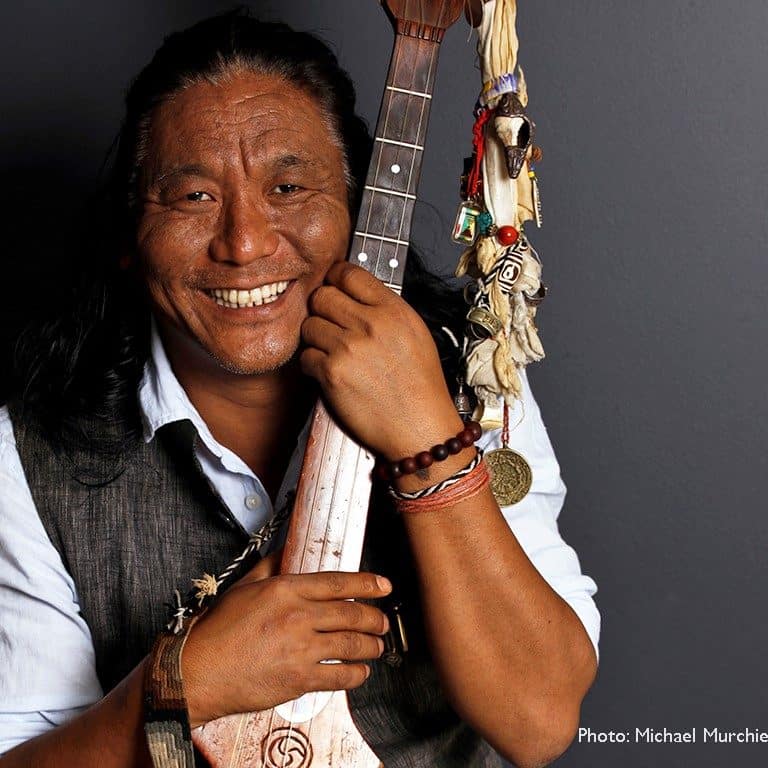 Tenzin Choegyal is a Tibetan artist, composer, activist, musical director and cultural ambassador. Born to a family of Tibetan nomads, Tenzin Choegyal was forced into exile in India as his family fled the repression in Tibet. As a child, Tenzin would listen to his mother singing in the nomadic style and he attributes much of his passion for that genre to her early influence. Tenzin channels the wisdom and traditions of his ancestors through his songs. Over the years, Tenzin has enjoyed a successful international career as a musician, playing at such prestigious events as WOMAD as well as several Concerts for Tibet House at Carnegie Hall, New York.

In addition to his much loved solo performances of soaring vocals and circling rhythms, Tenzin is an avid collaborator with musicians from diverse cultures, traditions and genres. From classical western (with chamber orchestra Camerata of St John’s), contemporary (with Philip Glass) to ancient traditional (with didgeridoo master William Barton), Tenzin embraces opportunities to take his music to uncharted territory both in the studio and on stage. Tenzin has six independent album released and recently collaborated with Philip Glass on the breathtaking score for the film ‘The Last Dalai Lama?’. With Laurie Anderson, Tenzin is now working on an interpretation of the Tibetan Book of the Dead which is due for release by the Smithsonian Institution in the coming months.

In 2008 Tenzin founded the annual Festival of Tibet in Brisbane, Australia, which showcases Tibetan culture through music, film, art and discussion.  He was musical director for the Asia Pacific Screen Awards in 2011 and 2013 and is artistic director of the Brisbane Himalayan Film Festival. In 2015, in his role as ambassador for the Australian Himalayan Foundation, Tenzin travelled to the border of Tibet on the Nepalese side, the closest he has ever come to his ancestral homeland.

Tenzin was musical director for the Asia Pacific Screen Awards in 2011 and 2013 and has written and performed soundtracks for numerous TV shows, films and documentaries. Through his music and cultural activities such as the Brisbane Festival of Tibet, Himalayan Film Festival and Women with Wisdom concert series (Sydney Opera House, Federation Square) Tenzin shares the Tibetan story of what it really means in being human.